Investigation: We were asked to visit the theatre again for a second investigation. Since Adam and Annie were in town visiting for the holiday, we couldn't pass it up.

We started out the night trying to debunk the picture that was taken during our last investigation at this location. We took many digital pictures but could not get any of them to look the same. Although we discovered that there was a slight orange glare and dents that could have created the supposed apparition, we weren't able to re-create it. Our conclusion is that we can neither approve or dispprove that the photo we took contains an actual apparition. 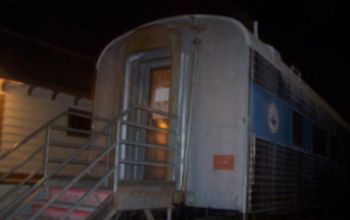 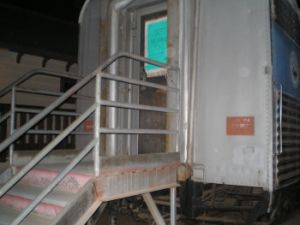 Next, Jean-Pierre and Adam decided to sit inside the train car dressing room locked up while Annie and Derek investigated the lobby and theatre. Jean-Pierre and Adam sat in the dark train and proceeded to ask the spirit(s) questions to try and get a response. The activity was almost too much as there were many unexplained noises (i.e. footsteps, knockings, voices, objects moving). At one point a question was asked if "Molly" would come out to play and it was followed by the closet door opening. The door was taped to help keep it closed since there were reports of it constantly opening. When the door opened, the tape made a loud ripping sound as if the door were pushed from the inside. Derek and Annie returned from the theatre only to learn what had happened. Derek decide to stay while Annie chose to go and talk whith the theatre crew. The spirits were asked more questions and more noises were heard. At one point, Jean-Pierre had left his EMF detector inside the closet. He then asked the spirit if they wanted to play with it. As soon as the question was asked a loud noise was heard inside the closet like something moved but the EMF did not go off.

At about 1:00 a.m. we decided to end our investigation of the train and move to the theatre. We turned off all the lights and asked more questions. We had Jennifer Garms, the Vice-President of the La Habra Depot Theater, ask some questions to try and provoke a spirit she thinks inhabits the theatre. She believes that one of the theatre's recently deceased tech crew members may visit the theatre from time to time. While questions were asked there were many temperature changes and shadows seen but nothing caught on film.

As we were packing our equipment up at the end of the investigation, Jennifer wanted someone to go with her to lock up the train. Jean-Pierre, Adam, and Derek decided to go and as they walked by the technical booth they heard a distinct whistle. Jean-Pierre was in front and thought that it was either Adam or Derek. Both had explained the they did not whistle. Adam said that the noise came from the Tech booth as if someone were standing there as they walked by. Also when everyone was just about ready to leave, the lobby phone began to ring. The ringtone was not a normal one and can not really be described. Jean-Pierre tried to answer the phone and only got a busy tone. As soon as he hung it up it began to ring again. Next, Adam answered with the same result. Again, as he hung it up it began to ring. Jean-Pierre tried again and this time began to talk. There was no answer but when he hung it up, the ringing stopped.